WOLLONGONG, Australia (CT) – A day after Tobias Foss took a surprise win in the elite men’s time trial at Wollongong Worlds, Søren Wærenskjold has doubled up for Norway in the U23 men’s event.

Wærenskjold was joined on the podium by 19-year-old silver medallist Alec Segaert (Belgium), and 21-year-old bronze medalist Leo Hayter (Great Britain) who spent an extended period in the hot seat before being ejected by Wærenskjold.

Wærenskjold himself had a nervous wait in the hotseat after Segaert bested his time at the first check. But the Belgian faded a little compared to Wærenskjold in the final lap, finishing 17 seconds down and giving Wærenskjold the biggest win of his young career.

“On the hot seat it was like a rollercoaster of emotions,” the Norwegian said in his post-race press conference. “So now I’m just really happy and relieved.”

Wærenskjold had been the beneficiary of some timely advice from yesterday’s winner, his compatriot Foss.

“Basically it was just to put the power down in the hard sections, the climbs, especially on the first half of the course and the steep climb and dare to save energy on the fast parts and just try to stay aerodynamic,” Wærenskjold said. “And, yeah, also a couple of corners that he advised me to be in the outside of the TT position to be a little safer because it was super fast corners today.”

Segaert also drew on the experience of an older teammate, having been in the team car behind Yves Lampaert yesterday. The Belgian and European U23 champion started out strongly.

“I didn’t feel the legs,” he said in his post-race press conference. “I was flying first time on the hill and I had to [back off] a bit for the first lap so I had a second shot for the second lap. But then when I came through after one lap, I knew I had something like the same time as Søren, but I heard he had a fantastic second lap, so I knew it would be hard to beat him.

“But I heard I was fighting for a silver medal and went all in for that. So silver it is and I’m very happy with that. I think a silver medal as a first-year U23 is something I dreamed of. Of course there’s one better place, but I have three more years for that.”

Bronze-medalist Leo Hayter also had reason to be happy.

“I’m quite satisfied, to be honest,” he said. “It’s my first international time trial for three years, so I didn’t really know what to expect.”

That result comes after a season in which Hayter became British U23 ITT champ, won the Baby Giro with two stage victories, and then signed a three-year deal with Ineos Grenadiers, where he’ll join his brother Ethan next year.

For Wærenskjold, 2022 has also been a successful year. His gold medal follows a stage win in the recent Tour de l’Avenir and victory in the U23 time trial at Norwegian nationals earlier this year. He’s hoping for further success in 2023.

“I’m with Uno-X for one more year, and it feels like a really good place,” he said. “I’m really happy where I am and yeah, we will see for the future. I think both me and the team will develop and hopefully I can do better in the last year [of the contract], especially in the first part with some good training in the offseason.

“Hopefully I can do maybe a couple of stage races where there is a TT involved so I can maybe do well in some GCs also. That will be really nice.” 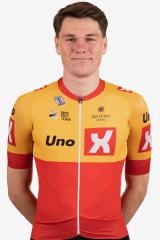