Belgium desperately wanted to win after missing out on home soil last year. Evenepoel made it happen.

WOLLONGONG, Australia (CT) – A year on from Belgium’s frustrating home Worlds in Flanders, the country’s elite men have made amends courtesy of a demonstrative solo victory from Remco Evenepoel.

Evenepoel was part of a 25-rider group that split off the peloton on the steep Mt. Pleasant climb with 77 km left to race. That group would go on to sweep up the remnants of some earlier breakaways before Evenepoel made his decisive attack with 35 km remaining.

Alexey Lutsenko (Kazakhstan) was able to follow Evenepoel initially, but when the pair reached the penultimate ascent of Mt. Pleasant, with 26 km to go, Evenepoel rode Lutsenko off his wheel and that was that.

The 22-year-old powered on alone for the last lap and a bit, taking what is already the 37th win of his remarkable young career, two weeks after winning the Vuelta a España – his first full Grand Tour.

Roughly 2:20 behind Evenepoel, in a group of favourites that only caught the remaining chasers in the final few hundred metres, Christophe Laporte (France) took out the sprint for silver ahead of Michael Matthews (Australia).

The early kilometres of Sunday’s race played host to two notable developments: the establishment of an 11-rider breakaway that would lead for several hours, and Mathieu van der Poel’s departure from the race after his arrest late the previous night.

On the race’s sole climb up Mt. Keira, the French team, led by Pavel Sivakov, increased the tempo, splitting the peloton with more than 220 km still to race. The likes of Tadej Pogačar (Slovenia), Wout van Aert (Belgium) and Dylan van Baarle (Netherlands) made it to the front of two pelotons, while defending champion Julian Alaphilippe (France), Michael Matthews (Australia), and Evenepoel were among those to miss the move.

When the 12 laps of the Wollongong city circuit began, a group of five riders split off the first, smaller peloton: the Australian duo of Ben O’Connor and Luke Plapp, Sivakov, Pieter Serry (Belgium), and Samuele Battistella (Italy).

With a little over 180 km to go the two pelotons came back together, thanks largely to the work of the German team. As the newly combined peloton sat up and relaxed for the first time all day, the five chasers continued on towards the breakaway. They made the catch with 152 km left to race, making a group of 16 out front.

That group led the peloton by as much as eight minutes at one point before the Netherlands’ Taco van der Hoorn and several Spanish riders came to the front to reduce the gap.

With 77 km to go, the gap was down to under two minutes when fireworks began on the Mt. Pleasant climb both in the breakaway and the peloton. The pace of Battistella and O’Connor in the break split the leading group of 16, while an injection of pace from France’s Quentin Pacher forced a decisive split in the peloton. The group of 25 that remained of the peloton over the top of the climb included Evenepoel and it would be from this group that the Belgian would ultimately make his winning move.

The group of 25 swept up the breakaway the next time up Mt. Pleasant, with 60 km remaining, putting Evenepoel in an ideal position as the peloton behind slowly drifted further off the pace.

Evenepoel attacked hard with 35 km to go, just outside two laps to go, with Lutsenko the only rider able to go with him. And then, on the penultimate ascent of the Mt. Pleasant climb, Evenepoel rode Lutsenko off his wheel and continued on solo.

“When you’re in [a group of] two, you just want to work as long as possible,” Evenepoel said. “But I felt quite quickly that I was stronger than Alexey, and I just wanted to go alone because there was no time to waste on a circuit like this.”

It was only in the closing moments of the race that Evenepoel knew he had it won.

“In a world championship the most unexpected situations can happen every lap, every kilometre,” Evenepoel said. “I knew when I was on the road with Lutsenko that I had a good chance to go for the win. But of course you need to keep pushing because the last lap was super hard, especially after doing half a lap alone.

“But then over the top of the climb I was getting more confident. [And] then I think 5 km to go the car came to me and said that I had 1:30 or something on Lutsenko. I think also from there on I started to believe it more. But then in the last kilometer, I really felt that I was the new world champion.”

Evenepoel started to celebrate inside that final kilometre, before saluting emphatically when he reached the finish line.

Behind Evenepoel, a cramping Lutsenko battled on alone before being caught by Lorenzo Rota (Italy), Matthias Skjelmose (Denmark), and Mauro Schmid (Switzerland) with just 4 km to go. The quartet looked set to sprint for the minor medals but then, inside the final kilometre, they were caught from behind, first by a a surging Pascal Eenkhoorn (Netherlands), Jan Tratnik (Slovenia), and finally by the remnants of the peloton. It was from that peloton that Laporte and Matthews would sprint for the minor medals.

Matthews explained the confusion in the bunch coming into the closing kilometres.

“We were talking in the peloton [about] if we were still racing for anything because we didn’t know exactly where anyone was,” he said in the post-race press conference. “It’s really difficult to get information in a world championships. There was still attacking on the final climb up Mt. Pleasant so the race was still on and then we just sort of kept catching bunches – even the last 500 metres we were still not even sprinting for top 10.

“But then I saw the French team lining up for Laporte and I jumped on the back of that and did my thing in the sprint. But even afterwards I didn’t know exactly where I finished, but I found out a couple of minutes later that I was actually third.

Matthews’s bronze is his third minor medal in the elite Worlds road race, after taking bronze in 2017 and silver in 2015.

“Obviously, we came here for the stripes on home soil,” Matthews said. “But yeah, coming away with the third place … it feels like a win here on home soil.”

Laporte’s silver medal came after a race in which France had animated the race on two key occasions: first on Mt. Keira with more than 200 km still to go, splitting the bunch, and then on Mt. Pleasant with 77 km to go, kickstarting the finale and selecting the group that Evenepoel would later win from.

“It was a plan to have a hard race and that’s exactly what we did,” Laporte told CyclingTips later. “We also started the race when we were at two minutes and a half behind the break and a big group went and then we had three good guys in the front, but not good enough to follow Remco. But I think not too many guys were good enough today to follow him,” Laporte said with a chuckle.

“Everything was not perfect for sure, but we can be happy with this result.”

For Evenepoel, meanwhile, this elite Worlds road race win comes four years after he won the junior men’s road race and time trial at the 2018 Worlds in Innsbruck. He skipped the U23 ranks and jumped straight to WorldTour in 2019 and has raced with Quick-Step Alpha Vinyl since.

At last year’s Worlds in Flanders, Evenepoel angered teammates by seemingly riding against team orders and later saying in the media he thought he could have won. A year on, everything seemed to go much more smoothly for the Belgian squad.

“The race we did today was just the plan,” Evenepoel said. “Of course, it would have been even better if Wout was with me in the front group, but I think those are race situations and you cannot handle this. I think the best decision we made was to start with two leaders and then with Quinten Hermans as the guy underneath, because he was also super, super strong today. I think what we showed today is just the race we wanted to ride and it turned out with a victory.

“I think how we raced today was really like a team and as we said before, it doesn’t matter how, but we want to become world champion with the team. It was Wout [van Aert]’s chance or my chance and my chance was to go from earlier on and Wout had to follow and sprint. I guess the early attack made it today. But yeah, I think we just deserve it. I think we really deserve it.”

In 2022 alone Evenepoel has taken a total of 15 victories, the most of any male rider. Among those wins, Liège-Bastogne-Liège, the Vuelta a España, and now the road race world title.

“When I became professional, I had two or three really big goals, and it’s to win Liège, a Grand Tour and a world championship,” Evenepoel said. “And to do everything like that in one year … it’s actually really incredible. I just cannot put enough words together to describe how proud I am of the things I did this year. I think a season cannot be better than that.” 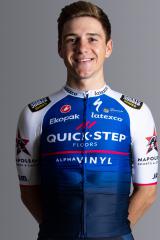