Carapaz holds on from the breakaway as Roglič gains 52 seconds on the red jersey.

Sneaking glances over his shoulder, sprinting out of the saddle and grimacing with the effort, Richard Carapaz (Ineos-Grenadiers) rode to a gutsy solo victory on stage 14 of the Vuelta a España, holding off the attentions of Primož Roglič (Jumbo-Visma) and Miguel Ángel López (Astana-Qazaqstan).

Carapaz had attacked from the breakaway and seemed set to comfortably take his second stage victory of the race until Roglič made his move from the peloton with four kilometers still to race, finally cracking his rival Remco Evenepoel (QuickStep-AlphaVinyl) who ultimately defended his red jersey and limited his losses to less than a minute.

The victory is Carapaz’s second in the race after he also won just 48 hours earlier on stage 12.

“We knew that today was a very important stage for us, that we could repeat what we did the other day,” Carapaz said.

“I was able to attack, I went alone and then my breakaway companions joined me. They came with me and then there was a pretty good collaboration.

“At the end, I knew the climb very well. So, I tried to set my own pace, without losing hope, because I knew it was very hard. It has been a great stage, quite important for my record and for me.”

Stage 14, on paper at least, seemed as if it would build towards a crescendo with a category 3 climb 107km from the finish, followed by a category 2 and a category 1 climb that, with just a small section of false flat in between, effectively formed one long climb to the summit finish at Sierra de la Pandera.

A tailwind, however, provoked action in the peloton from the very start as the riders hit 49.2km/hr in the first hour of racing and launched attack after attack in an attempt to form an elusive breakaway.

This breakaway built up a three and a half minute advantage before the Puerto de Siete Pilillas, a 9.9km long, category 3 climb at an average of 3.5%. Back in the peloton, Rémi Cavagna and QuickStep-Alpha Vinyl installed themselves on the front and kept the breakaway close with the gap remaining under four minutes.

At the summit, Carapaz collected the maximum three mountain points available and on the sweeping descent, the peloton briefly split again while the breakaway extended its lead to 4:16.

This status quo held until the intermediate sprint 33km from the finish when green jersey Pedersen extended his already sizeable lead by rolling through on the front of the breakaway and taking maximum points.

He then stayed on the front, setting the pace for his teammate Elissonde and dropping away as the breakaway began the final climbs.

On that penultimate climb, the breakaway fractured as Sanchez accelerated up the road, pursued by Conca, Champoussin, and Carapaz who bridged across to the Spaniard with 9km still to race.

In the peloton, Robert Gesink and Chris Harper accelerated too, spearheading a Jumbo-Visma offensive, as Ineos-Grenadiers also moved to the front for Carlos Rodríguez. Despite this pressure that eroded the breakaway’s advantage, Evenepoel remained tucked in behind, seemingly unruffled.

Four kilometers from the finish, Roglič capitalized on his team’s efforts, and attacked off the front of the peloton leaving Evenepoel himself to chase but as the Slovenian pressed on up the climb, Evenepoel cracked and began shedding time to his older rival.

As Roglič pressed on, Mas and López recovered enough to join him and this trio started reeling in the lone leader Carapaz who had left his breakaway companions in response to Roglič’s attack.

But Mas was dropped too as, further down the mountain, Evenepoel began rediscovering his rhythm and limiting his losses in an explosive GC battle that saw all the Belgian’s major rivals except Juan Ayuso (UAE Team Emirates) gain time.

In the battle for the stage victory, meanwhile, Roglič and López continued hunting down Carapaz in the final few hundred meters but the Ecuadorian ultimately held on for a memorable victory. 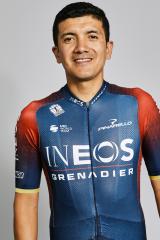