Mischa Bredewold (Parkhotel Valkenburg) won the sixth and final stage of the Simac Ladies Tour after making a late escape from the peloton in the final seven kilometres.

Bredewold was joined by Eleonora Gasparrini (Valcar Travel & Service), who took second as the pair held off the bunch to the line in Arnhem.

The 2022 Simac Ladies Tour concluded with its longest stage, a 150km day set on circuits in and around Arnhem in the east of the Netherlands.

With small but repeated climbs on both of the two laps that would be used, the race was not as hard as Friday’s “queen stage” in Limburg but there were plenty of chances for riders to attack and make the racing difficult. The day started with Wiebes in the yellow jersey, six seconds ahead of stage 5 winner Audrey Cordon-Ragot (Trek-Segafredo) and 36 seconds clear of Karlijn Swinkels (Jumbo Visma) in third, with the rest of the top-10 also all within a minute and 14 seconds of the lead.

With 13km to go three leaders were caught, bringing everything back together for the last two laps.

Alison Jackson (Liv Racing Xstra) went on the attack, and had a small advantage, but was caught after just 4km out solo. Going into the final lap, Audrey Cordon-Ragot attacked the peloton to take a three-second bonus on the line, prompting a counter-attack from white jersey Mischa Bredewold (Parkhotel Valkenburg). The Dutch rider was joined by Eleonora Gasparrini (Valcar Travel & Service) and the pair had a slight gap with 7km remaining.

Despite only having a slender advantage, the leading duo fought hard to the finish line and held off the chasing bunch. Bredewold led out the sprint from the front, but Gasparrini could not come around, delivering the white jersey the second win of her career in Arnhem.

Wiebes took third behind, five seconds down on the winner, successfully defending her jersey to take overall victory after winning two stages earlier in the week.

The Women’s WorldTour continues on September 7 with the five-stage Ceratizit Challenge by La Vuelta. 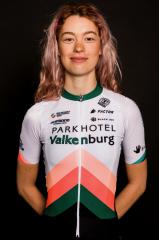