Wiebes gives chance to teammate as Team DSM take 1-2 on the line.

Charlotte Kool (Team DSM) took victory on stage 3 of the Simac Ladies Tour as race leader Lorena Wiebes helped her teammate to the win, and finished second herself.

The pair launched their sprint before the final corner of the stage, riding away from the peloton before Wiebes allowed her reliable lead-out rider to take the win. Georgia Baker (BikeExchange-Jayco) rounded out the podium in third.

There was no day-long breakaway on stage 3, with a short-lived move from Sophie Wright (UAE Team ADQ), Justine Ghekiere (Plantur Pura), Eline van Rooijen (AG Insurance-NXTG), and Daniek Hengeveld (GT Krush Tunap) in the middle of the stage the only break to speak of ahead of the expected sprint. 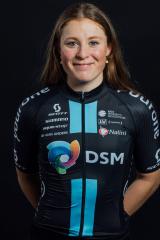