It wasn't the GC shuffle that many expected, but seconds were traded among the top 10, with Thymen Arensman the winner of the day.

Thymen Arensman has been that far-from-rare rider, the leader in waiting, the ‘next big thing from [insert nation here]’ since he turned pro half way through 2020 and promptly took two top-10 finishes at the Vuelta a España in the same season. Two years later, the 22-year-old took his first Grand Tour victory on the queen stage of the 2022 Vuelta after leaving his breakaway companions behind, vaulting back into the top 10 overall.

“It’s still really hard to believe, it really has to sink in,” Arensman said at the finish. “I can’t believe it – the queen stage of the Vuelta, Sierra Nevada at altitude, everyone was talking about this stage. To be honest, I didn’t feel super good on the stage but apparently the others felt their legs even more. When I was alone, I had the coach Matt Winston on the radio. I was only thinking I’ve got to push 400 watts and it was enough and it’s unbelievable.”

The DSM man was one of the 29 riders who forged a gap after a furious start to stage 15, and sitting 11th overall, he was a threat to the peloton and breakaway alike.

He’d tried to get in a move earlier in the race but was called back into the peloton, then a jour sans in the stage 10 time trial saw him ship time, paving the way to another attack deeper in the race.

Arensman has proved before that he has the staying power for a three-week race, but the altitude finish at Sierra Nevada did not seem to align with the Dutchman’s attributes – born at sea level, after all – at least compared with some of his rivals in the breakaway like Richard Carapaz (Ineos Grenadiers) and Rigoberto Urán (EF Education-EasyPost). Add to that the fact that Ben O’Connor’s AG2R-Citroën teammates had been sent forward to protect their leader’s position on GC, and Arensman really had to take the race into his own hands and do a lot of work on the climb to Sierra Nevada.

With Marc Soler (UAE Team Emirates) still half a minute up the road having attacked at the bottom of the climb, Arensman dispatched his remaining breakaway companions eight kilometres from the summit and ate hungrily into the gap, joining the fading Spaniard within a kilometre. The DSM rider then went solo just inside the last seven kilometres and stayed away to take his first road win and a second pro victory in as many months.

“It looked like [Soler] was waiting for me,” Arensman said. “I thought that Marc Soler is such a great rider and I don’t know if I can take him on but then I accelerated on the steeper parts and he cracked and I thought everybody is really on the limit and I maybe have something left so unbelievable.”

The first and only high-altitude finish of the 2022 Vuelta was expected to set the stage for a significant reshuffle of the GC, or perhaps a consolidation. Neither really happened.

Despite the best efforts of Jumbo-Visma, which put two riders into the breakaway (as did Quick-Step) before causing chaos at the foot of the final ‘special category’ climb, Remco Evenepoel looked more than up to the task, all the way until the last kilometre. In fact, Primož Roglič was the one who looked under pressure in the first half of the ascent, dropping to the back of the five-man GC group after his pace setting failed to trouble the red jersey, who gained a teammate from the breakaway when Roglič had spent all his chips.

Roglič left his own attack for the eleventh hour, riding away from Evenepoel with the flamme rouge in sight, and gained a morale-boosting 15 seconds to repay his team for a hard day’s work. This brings Evenepoel’s cushion down to 1:34 with six stages to go.

Further down the top 10, Arensman’s stage-winning effort saw him move up to eighth overall, while Ayuso and Carlos Rodríguez swapped places after a tough day for the latter. The Spanish national champion was not the only Ineos Grenadier to suffer. After a curiously timed attack on the way to the final climb, Tao Geoghegan Hart plummeted from ninth to 18th, losing over 20 minutes to the red jersey. 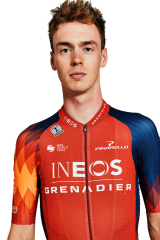