WOLLONGONG, Australia (CT) – Much of the talk before the elite men’s time trial at Worlds was about Remco Evenepoel and Filippo Ganna. Could Evenepoel recover in time after the Vuelta and the recent long-haul flight to Australia? Could Ganna win a third-straight Worlds ITT?

Few had Tobias Foss in the conversation as a genuine contender. Fewer still thought he was actually a chance to win it.

And yet, on Sunday afternoon, on two laps of a technical circuit around Wollongong, it was 25-year-old Foss that upstaged the biggest names on the time-trialling scene, to become the first Norwegian to win an elite time trial world title (or any medal for that matter).

Foss stormed to victory courtesy of a brilliant second lap, earning himself a rainbow skinsuit with mere seconds to spare.

“For sure it was unexpected,” a reserved and measured Foss said in the podium finishers’ press conference. “I knew my shape was good coming from Canada [GPs Quebec and Montreal] and putting in some nice work. And yeah, training has gone well in the last one and a half to two months. And then also I was really eager to really go deep today.

“So it was, yeah, good preparations, good execution. And then in the end there was a goal [but] that’s still unreal and also surprising to me. But I’ll take it.”

Switzerland’s nearly-man, Stefan Küng, who’d led proceedings at both intermediate checks, finished his effort after Foss, stopping the clock an agonising three seconds too slow – so close to a long-awaited Worlds win. Evenepoel was just six seconds further behind, taking the bronze medal for the second year running, and his third medal in the event without a win. The top three, all within 10 seconds.

As many expected, Evenepoel found the post-Vuelta recovery and quick turnaround before Worlds to be difficult. But he recovered just in time.

“Actually today was the first day I started to feel a bit normal,” he said in the press conference. “Beginning of the week I was actually not good at all, a bit scared for today, to be honest. But I think what I could do on my bike today was just good. But yeah, I think there were just three guys stronger than me today, so nothing to complain [about], nothing to be sad about.”

Evenepoel wasn’t sad, necessarily, but he was surprised that Foss won. Sure, Foss had won two Norwegian ITT titles before, and he’d gone top five in time trials at races like the Giro, but he’d never won anything like Worlds.

“Looking at the time splits, I think Tobias did just a really fast last seven or eight kilometers if I’m not wrong,” he said. “So yeah I was a bit surprised crossing the finish line hearing that he won the race because in my radio they were actually never talking about him. The only name I was hearing was ‘Kung, you, Kung, you’. So it was a bit of a surprise to be honest in the end.

“It’s a small surprise, but if you ride so fast in the second part, then it means you just have a little bit more than the others and you were just the strongest in the end.”

Küng, too, was surprised. Surprised and bitterly disappointed. He’s come close to Worlds glory before – he now has three top-fives in the time trial and a third in the road race – and everything was on track for today to be his day.

“I could cry, and not out of joy,” Küng said with a wry smile. “I’ve been searching around this big win for quite some time. I’ve been second, I’ve been third, I’ve been beaten by Remco a few times, by Ganna, all the other guys. I thought, ‘Yeah, I know how to beat them. I’ve beat them all in the past. I just have to beat them on the same day.’ And when I made the list of the favorites this morning, I beat them all. But I didn’t have Tobias in mind, who put in a great ride today.”

Küng being fastest at both intermediate time checks was perhaps reflective of the fact the course suited him well; or at least his preparation for that course.

“It’s a bit punchy, a bit left-right, a lot of changes of rhythm – it suits me quite well,” he said. “I would have preferred this year’s course over last year where it was just like 20 km straight. I adjusted my training according to the course. Together with my coach we really looked into it.”

That preparation put him in good stead.

“I was pretty confident going into today,” he said. “I knew what I had to do, what had to be done, and the first lap it felt like flying. For sure the second lap was a bit harder. But yeah, when I heard that time split that I was ahead on Remco and Ganna and [Tadej] Pogačar and all the rest, I thought, ‘Well that’s nice. Let’s keep it in the flow.’

“But yeah, I think Tobias surprised us all today, me as well. But in the end I have to accept it and keep working, keep on fighting. One day I hope it will turn my way.”

So how did Foss manage to finish so strongly? To pull back 12 seconds on Küng in around 10 km?

“I would say that the game plan today was using the terrain well in the first lap and going hard in the hardest part, but still trying to recover a bit where the speed was high, especially with the downhills before the corners,” he said. “And then on the flat part I was trying to hold a bit back to having a nice progression through the race.

“When I crossed the finish line the first time it was was all about leaving everything out there, but also still have something left because the last 6 km was quite tough and also a bit mentally too – it was a long straight.

“So yeah, I think I just portioned my energy really well and I managed to have something in the end and executed the race well.”

Being able to ride to plan so well was satisfying enough, but doubly so after what has been a frustrating season. After a breakout 2021 that was headlined by an impressive ninth at the Giro d’Italia, 2022 hadn’t been quite as kind to Foss. At least until now.

“To be honest it’s been quite a challenging season mentally,” he said. “I feel like I took some really good steps through the winter training and was onto something good in [Volta ao] Algarve. The general feeling there was good. And then I had a crash in Coppi [a Bartali], hitting my head quite hard, and I think that also messed up a bit my Giro where I was going quite hard for it.

“It’s been really challenging, but luckily I had a really good team in my back and good family and friends around me. So I had good reset after Nationals, rested well mentally, and I gave my body the rest it needed. And then I’ve been really fresh, especially mentally, to be able to put in the hard work that’s necessary for this race after this became a really big goal. So I’m really happy sitting here now.”

And fair enough too. 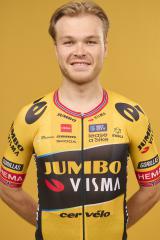