Richard Carapaz (Ineos Grenadiers) took his third victory of this year’s Vuelta a España with a perfect performance on stage 20. The Olympic road race champion was in several key moves throughout the final mountain stage before attacking just before the summit of the final climb of the day.

He dropped Sergio Higuita in the process before holding off a late challenge from Thymen Arensman after the Team DSM rider had attacked from a small group of GC contenders inside the final 3km.

The stage also saw Remco Evenepoel close in on a maiden grand tour title. In truth the young Belgian was never in any difficulty during the stage. His team supported him until the final two climbs before he measured his efforts whenever his rivals looked for signs of weakness.

Movistar, with its leader Enric Mas, tried to isolate Evenepoel on several climbs throughout the stage but even when they succeeded they had no answer when it came to trying to crack the QuickStep rider.

On the final climb the race came down to a battle for the podium places, but Mas did enough to solidify second at 2:05, with Juan Ayuso (UAE Team Emirates) securing third overall at 5:08.

The only major loser of the day was young Carlos Rodríguez (Ineos Grenadiers). The Spaniard was dropped several times through the stage, including on the first climb of the day, and would eventually drop from fifth to seventh, missing out on sixth overall to Arensman by just a single second.

For Carapaz the stage represented another classy mountain display. He followed all the right moves and went on the attack at the perfect times. Even when the bunch closed to within just a handful of seconds of him and Higuita on the final climb, the Ineos rider held firm and drew out enough time to take the win. Carapaz also secured the mountains jersey for his efforts.

Evenepoel raced with real maturity too. He never panicked, even when his teammates were dropped, and followed all the right wheels when Mas attacked twice on the penultimate climb. Miguel Angel Lopez looked to break up the GC group in the closing stages but once more Evenepoel kept his cool. His only signs of emotion came at the finish when the reality of his near success began to dawn on him. With just one stage to go he is set to become the 2022 Vuelta a España champion.

“I don’t know what’s going through my head and my body right now,” the Belgian said at the finish.

“It’s amazing, all the bad comments for last year, I think I finally delivered and I answered everyone with my pedals. I’ve been working so hard to come here in the best shape possible and to now win this Vuelta is amazing. It’s my first grand tour starting healthy so ‘m really happy to be the first guy to win a grand tour for Patrick as a CEO, again for Belgium, for my teammates, for my parents, for my fiancée. I’ve been away from home so many days, so many weeks, so many months. It’s all thanks to them.

“I was really stressed this morning, maybe I didn’t show it but I was really stressed. I didn’t sleep too much last night, because you know what’s coming and it was a super tough stage. I’m just super happy that I won La Vuelta. I didn’t even think about winning a stage, I only wanted to win the general classification. I only had to follow and control and even my power. In the end, the race was super hard but we did super well.” 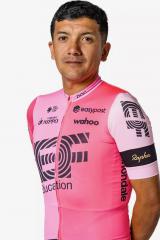