Two gold medals for Great Britain as the stars of the future shone bright.

WOLLONGONG, Australia (CT) – Zoe Bäckstedt and Joshua Tarling have doubled up for Great Britain on day three of the Wollongong Road Worlds, winning the women’s and men’s U19 time trials.

Seventeen-year-old Bäckstedt started as the favourite in the junior women’s event and duly lived up to her billing, completing the 14.1 km course in a time of 18:27 (45.9 km/h) – considerably faster than her goal of 20 minutes and more than 90 seconds faster than her closest rival.

“There was a lot of people going ‘she’s the favourite’ so yeah, I needed to win. But I tried to keep all that pressure away from me and just focus on myself.”

Bäckstedt goes into the weekend’s road race as defending champion and the favourite for a repeat victory. She has signed with EF Education-Tibco-SVB for next season, joining her older sister Elynor in the WorldTour.

In the junior men’s time trial, Australia’s Hamish McKenzie was fourth rider down the start ramp and announced himself as the rider to beat. The Australian junior time trial champion set the best time at both intermediate checks and the finish, and ended up spending almost three hours in the hotseat, waiting to see whether anyone would beat his time.

In the end only 18-year-old Tarling was able to topple the Australian, setting new best times at both intermediate time checks before taking 19 seconds off McKenzie’s time at the finish. His time of 34:59 for the 28.8 km course saw him average 49.4 km/h.

McKenzie held on for the silver medal while Germany’s Emil Herzog rounded out the podium.

“It just feels like a relief,” Tarling said. “So much hard work [went into it]. I was a bit annoyed after last year [finishing second]. I really wanted it and it’s just a relief, mainly.”

Tarling’s win comes a year after he was runner-up in the same event in Flanders. He recently signed a three-year deal with Ineos Grenadiers, from 2023 to 2025. 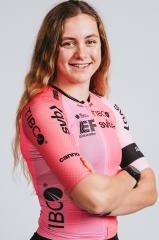 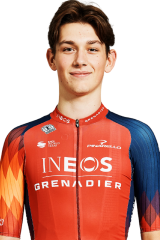