After successfully defending her lead on the final stage and finishing in the peloton, stage 2 winner Ashleigh Moolman Pasio (SD Worx) secured the overall victory in Switzerland.

The day’s breakaway duo of Ella Harris (Canyon-SRAM) and Quinty Ton (Liv Racing Xstra) were caught in the final 2km of the stage after being away for much of the day with a maximum advantage of six minutes.

“All season long, I was hoping for a victory in a WorldTour race, and it happened in the last race of the season,” Lach said at the finish. “I’m super happy. I was keeping believing all year, and it happened, so I’m very very happy. I’m a pretty good sprinter, sometimes when it’s a bit smaller bunch I can do very good. I was believing all the race, but first I had to survive all these climbs. I’m super happy and it’s an amazing feeling to be first on the finish line.”

She needed to wait for confirmation from the photo finish, and was both relieved and elated by the verification that she had triumphed.

The last race of the season ended up being a weekend of firsts, with Moolman Pasio’s overall win the first WorldTour stage race victory of her career, after taking her first WorldTour stage win on Saturday. Moving on to AG Insurance-NXTG for 2023, the 36-year-old thanked her team in her last appearance in SD Worx colours.

“It’s really just so special. It’s been 13 years, my career, and this is really the first time that I win a WorldTour race,” she said at the finish. “Yesterday the Queen stage victory and today the overall victory, it’s really a special way to finish off the year and also my time with SD Worx. My teammates were incredible today, super strong, and I’m very happy.”

After two days of significant climbing, stage 3 was a more rolling day, featuring only two categorized climbs before a flat run-in to Geneva. At 148km, it was the longest stage of the weekend, and the final day for overall leader Ashleigh Moolman Pasio (SD Worx) to defend her jersey.

Early in the stage, Queen of the Mountains Elise Uijen (Team DSM) tried to attack, but the move didn’t stick and it was Petra Stiasny (Roland Cogeas Edelweiss) who went away on the first climb. Stiasny took the maximum points on the climb after 36km of racing but, being solo with only a handful of seconds’ advantage, she was soon brought back to the peloton. Having taken second at the QoM point, Uijen sealed her victory in the classification.

The next move came from Ella Harris (Canyon-SRAM) and Quinty Ton (Liv Racing Xstra), who pulled out a substantial gap. Their advantage continued to grow over several kilometers and after 80km completed, the pair were more than six minutes ahead of the peloton. With Harris and Ton 12 and 25 minutes down on GC respectively, they weren’t a threat to the overall, and the bunch remained relaxed behind.

Heading into the final 40km of the stage, the gap began to shrink as Movistar took control of the peloton, wanting to bring things together for stage 1 winner Arlenis Sierra (Movistar). The leading duo were within a minute at 23km to go, but stalled at around 30 seconds for a long time as Canyon-SRAM disrupted the chase in the peloton. In the last 8km, the gap began to close more quickly, and the catch was eventually made at 1.9km to go.

It was SD Worx, BikeExchange-Jayco and Team DSM who lined up their lead-outs heading into the sprint, but the trains became disorganized going into the last 900m of the stage with most sprinters finding themselves isolated. Cecilie Uttrup Ludwig (FDJ-SUEZ-Futuroscope) put in a final effort for teammate Marie Le Net, who launched her sprint first, but it was each sprinter for themselves as they spread across the road in the final 200m of the finishing straight.

Tamara Dronova (Roland Cogeas Edelweiss) led from the front, but it was Marta Lach (Ceratizit-WNT) who surfed the wheels to then sprint up the right hand side of the road, coming to the line just milimetres ahead of Dronova. After being piloted by Annemiek van Vleuten and then Jelena Eric, Sierra found herself slightly boxed in in the chaotic sprint, settling for third.

Leader Ashleigh Moolman Pasio finished 24th on the stage to secure her victory ahead of Annemiek van Vleuten and Elisa Longo Borghini (Trek-Segafredo). As well as Uijen taking the mountains jersey, DSM take home the best young rider jersey on the shoulders of Liane Lippert, whilst the points jersey goes to Soraya Paladin (Canyon-SRAM). 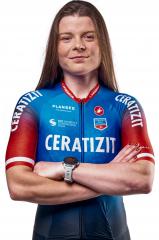