Ashleigh Moolman Pasio (SD Worx) took the first Women’s WorldTour victory of her career on stage 2 of the Tour de Romandie Féminin, riding away from Annemiek van Vleuten (Movistar) on the final climb of the day.

The world champion settled for second at the finish line at Thyon 2000, while Elisa Longo Borghini (Trek-Segafredo) took third on the race’s ‘queen stage’.

After a whittling down process on the final 17 km climb, Moolman Pasio, Van Vleuten, Liane Lippert (Team DSM) and Petra Stiasny (Roland Cogeas Edelweiss) emerged as the leading group, but it was two attacks in the last 3 km from the South African which saw her ride away from Van Vleuten to take the victory.

Elise Uijen (Team DSM) and Georgia Williams (BikeExchange-Jayco) were away for much of the day, chasing Queen of the Mountains points, but were caught on the penultimate climb.

From the beginning I felt like ‘OK, the legs are pretty good’,” Moolman Pasio said at the finish.

“But I mean it’s late in the season and we’re not really sure where everyone’s at. But then when we hit the second-to-last climb, that’s when I really felt that I had very good legs today. My teammates did an exceptional job, on the first climb there was a lot of attacking from Demi [Vollering] and Anna Shackley. Then Marlen Reusser went on the flat part before the last two climbs and it was the perfect situation for us.

“As we passed Marlen, I felt really good so I started to accelerate there, accelerate, slow down, accelerate. Then at some point it was just Annemiek and I.”

“At first I let [Van Vleuten] do a lot of attacking and accelerating, and I could really feel she was really out the saddle and going, but I felt really in control in my saddle, so every time I just followed, followed, followed. Then one moment I could see ‘OK, she’s really done’ and that’s when I decided to make my move.”

“Of course we will do everything tomorrow to keep the lead. We’re only four riders in the team, but we’re a very strong four riders, so I know we will be working very hard and very motivated tomorrow to win the race overall.”

Stage 2 saw the Tour de Romandie hit the big climbs with a challenging course from Sion to Thyon 2000 in the southwest of Switzerland on Saturday. It was a shorter day at 104km, but it featured 2,489m of elevation gain and over 30km of categorized climbing before the mountain-top finish at Thyon 2000.

The stage started with an early category 3 climb, coming after 6km of racing, and this incline kicked off the attacks. Queen of the Mountains Elise Uijen (Team DSM) accelerated towards the top to claim maximum points, closely followed by second in the classification Georgia Williams (BikeExchange-Jayco). Getting a bit of a gap on the climb, the pair pushed on over the top to leave the peloton behind and stretch out a lead.

On the following flat roads towards the intermediate sprint, a few riders including home names Linda Zanetti (UAE Team ADQ) and Nicole Suter (Switzerland) attacked, but couldn’t get away from the bunch. After 30km of racing, the leading pair had two minutes and fifty seconds on the peloton, and it was Williams who claimed the intermediate sprint.

With Williams and Uijen both more than two minutes down overall, neither were a big threat on GC, so they were allowed to stay up the road for a large portion of the stage, but Movistar kept control on the front of the peloton. Hitting the base of the penultimate climb of the day – a 13km ascent to Suen – Uijen and Williams were still ahead but the attacks started in the peloton as the effort stretched the bunch out. Petra Stiasny (Roland Cogeas Edelweiss) tried to get away on home roads, but the efforts of Movistar and Annemiek van Vleuten in the peloton put an end to her attempt. The climb heavily cut into the leaders’ advantage, who were only 40 seconds ahead after a few kilometers of climbing.

Unsurprisingly, then, Uijen and Williams were caught around 6km from the top of the climb. Approaching the top, the high pace set in the peloton had reduced the bunch significantly, which had shrunk down to around 20 riders with still another big climb to come. Race leader Arlenis Sierra (Movistar) was still in the group, but seemingly working for Van Vleuten.

Liane Lippert (Team DSM) crossed the summit first to take maximum mountain points before the race hit a short descent. There was little time to relax on the descent, though, as SD Worx in particular tried to make the race hard on the approach to the final climb.

Their efforts forced a split in the group, as Marlen Reusser (SD Worx), Soraya Paladin (Canyon-SRAM) and Sierra got a gap on the remainder of the peloton. With SD Worx and Movistar both happy to let the trio go, the chase stalled behind and the gap quickly grew out to a minute by the start of the final climb. Marta Cavalli was setting the pace behind for FDJ-SUEZ-Futuroscope, but not significantly eating into the lead on the early part of the climb.

With 11km remaining, Cecilie Uttrup Ludwig (FDJ-SUEZ-Futuroscope) launched a tentative attack, but didn’t really get a gap. The result of the acceleration though was that Demi Vollering (SD Worx) slipped out the back of the group, and the leaders were brought back to within 25 seconds. Sierra was caught first, putting in a brief effort for Van Vleuten before dropping away. The leading duo were eventually caught at 8.5km to go.

Ashleigh Moolman Pasio (SD Worx) was the first to put in a move after the catch, with only Lippert, Van Vleuten and Stiasny holding on to her acceleration. These four looked to be riding away, but then were rejoined by Veronica Ewers (EF Education-TIBCO-SVB), Elisa Longo Borghini (Trek-Segafredo), Yara Kastelijn (Plantur Pura), Amanda Spratt (BikeExchange-Jayco) and Évita Muzic (FDJ-SUEZ-Futuroscope).

With 6.4km to go, Van Vleuten put in a big acceleration, but did not just ride away from the group, instead taking with her the same four-rider group as before. This time, they definitively dropped the rest of the race.

Heading into the final 3km ramp, Moolman Pasio upped the pace, which saw Lippert and Stiasny dropped as the South African and Van Vleuten went away alone. With 2.3km to go, Moolman Pasio put in another big acceleration, this time enough to distance the seemingly struggling Van Vleuten. Behind, a steady ride from Longo Borghini saw her pass Lippert and Stiasny and close in on Van Vleuten towards the top of the climb.

Going under the flamme rouge, Moolman Pasio had a 10-second advantage and increased her lead towards the line, taking her first WorldTour victory and bettering Van Vleuten on a tough day of climbing. Van Vleuten held off Longo Borghini to take second, whilst the Italian’s determined ride earnt her third on the day.

Moolman Pasio now leads the overall by 30 seconds over Van Vleuten, with Longo Borghini third at 49 seconds down. Elise Uijen’s efforts early in the stage means she keeps the mountains jersey, whilst the points and youth jersey also stay with Sierra and Lippert respectively.

Sunday’s final stage features the least challenging profile of this tough edition of the Tour de Romandie, though the road is still up and down most of the day. There are two categorized climbs on the 148km stage before a descent into Geneva for a flat finish. 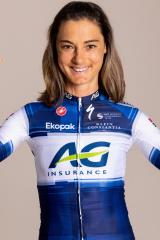