The story of a record-breaking ride to help those in need. 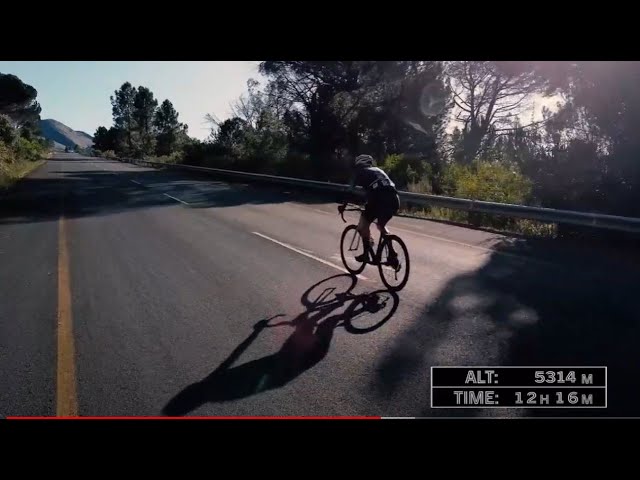 Earlier this year, South African cyclist Jason van’t Slot completed his first Everesting. In that he’s not unique – many thousands have climbed the height of Mt. Everest (8,848 metres / 29,032 feet) in a single ride. But Jason isn’t your average cyclist.

Jason has cystic fibrosis, a genetic condition that thickens mucus around the body, making breathing difficult (among other symptoms). In completing his Everesting in 16 hours and 12 minutes, Jason broke the world record for the fastest Everesting by a person with cystic fibrosis. You can read Jason’s story below, and watch the video about his record ride above.

The onslaught within the bunch stops as we crest the climb, my lungs burning as I inhale hard, trying to siphon oxygen through every breath. The routine bronchospasms begin, my head bows, eyes water and temporarily shut after each cough. Coughing fits and cycling are part and parcel for me.

Purposefully positioned on the side of the bunch I peel to the side and upheave the contents of my lungs onto the tarmac, avoiding myself when I can, and the rider behind me. My airways are narrowed, due to a thick sticky mucus that lines them, leaving a slender opening through which I can feed my oxygen-deprived legs. You can replicate the feeling next time you’re pushing up a climb by breathing through a straw or only though your nose.

Once I catch my breath the guy next to me chirps “Mate, you going to the doctor after the race?”, implying that I should not race when I am sick. Through my gasping I make out “I have a lung condition, cystic fibrosis.” Making light of the potentially awkward encounter with the stranger, I smile. “I will be coughing all day,” I add. “If you don’t hear me coughing it means I have been dropped, or you have been dropped”.

While out training I have had someone recognize me. “You’re the guy who is always coughing like crazy in the bunch, right?” Ironically, the more I cough the better, as it is a form of physio for my lungs. In fact, my position on the bike – bent over the bars with my ‘Froome-like’ flailing elbows (maybe it’s something in the African water here) – opens my lungs, allowing for postural drainage. That, coupled with the vibrations of the road or trail, help dislodge the mucus that sticks to my lungs like golden syrup does to the walls of a bottle.

Counterintuitively, when I am sick it’s even more important to ride gently as my ‘preferred’ form of physio. It’s not uncommon for me to ride with an IV line in my arm while receiving antibiotics.

Cystic fibrosis (CF) is a life-shortening genetic disease that mainly affects the lungs and digestive system. The degenerative condition regresses with age, and can result in fatal complications such as liver disease and diabetes as all organs begin to malfunction and fail.

Breathing is problematic as the thick mucus acts as a breeding ground for pathogens within the lungs. This leads to severe lung infections and persistent recurring lung infections scar the lung tissue, rendering permanent damage, and eventually lung failure. Breathing obstruction is further enhanced through inflammation within the airways and becomes exacerbated with infections.

CF came with a limited life expectancy until Trikafta/Kaftrio was developed – a lifesaving medication for this chronic lung condition. The cystic fibrosis community didn’t know if a medication like this would be available in our lifetimes. Now it is available but unfortunately because of our geographic location and financial cost it’s impossible for most of us to get it in South Africa.

I wanted to change that by “Everesting for Cystic Fibrosis” and raise funds and awareness for the South African Cystic Fibrosis Association. I wanted to help support legal negotiations and cover other costs to facilitate access to this life-changing medication for all South Africans with CF, at an affordable price.

This medication is available in select first-world countries. CFers in South Africa must go overseas to get their hands on it. It’s also financially impossible for most as the current price of a 12-month supply is around US$311,000.

There are a few things I used to take for granted when riding: the simplicity of carefree snacking or a simple coffee. Cystic fibrosis related diabetes (CFRD) has been the latest, and arguably the most dangerous and unstable spanner in the works when it comes to my riding. All my previous nutritional knowledge no longer applied once I developed CFRD.

One day I am riding with 15 grams of carbs over 4.5 hours, like the first 2,500 m of my Everesting. Two weeks later I am stuffing my face with 125 grams of carbs per hour like Mathieu van der Poel’s Flanders nutrition strategy and I’ve stopped using insulin altogether. The only certainty is that my jersey pockets are fully laden for whatever surprises my body might throw at me.

I have a continuous glucose monitor in my arm and I can read my glucose levels by tapping my phone on the sensor every 15/20 minutes on the fly. What makes CFRD so complicated is that it is a combination of type 1 diabetes (insulin deficient – the pancreas doesn’t make enough insulin), and type 2 diabetes (insulin resistant – the body does not use insulin correctly to break down food and keep blood sugar levels normal). This is further exacerbated by the fact medication to treat CF at times makes one more insulin-resistant.

The symptoms of a sugar low and high are identical and getting it wrong (sugar low in particular) can result in a coma (which has happened for four hours after a race) or death. Your vision becomes blurred, speech slurred, your legs ache, and you become so weak all you want to do is sleep. Essentially, you’re drunk trying to ride a bike. When your sugar levels are too high, you cannot stop and must ride harder to stabilize it.

Having CF means that my body requires 20-50% more energy to perform daily activities to maintain a healthy weight to fight off infection. This is complemented by artificial enzymes to ‘help’ break down the food. As a man, I would need 2,500 calories per day, but as a man with CF I need 3,000 calories and 3,700 calories to gain weight – and I haven’t even got on the bike yet!

When I did the Cape Epic (a grueling multi-stage mountain bike race) I was needing to replace upwards of 6,500 calories a day to recover for the next day. I literally ate my way through those eight days as I went through a month’s worth of artificial enzymes following my feeding schedule.

My Everesting was more complicated on a physiological and nutritional level.  I had to relearn to essentially eat and fuel on the bike again as I was now diabetic. I was much more scientific about my nutrition and training and recovery.

The underlying cause of CF is a faulty gene or CFTR membrane that disrupts the movement of salt and water in the body’s cells (that’s what Trikafta corrects). Basically, my body does not reabsorb any excreted salt (most people’s skin partially reabsorbs the salt from sweat). In fact, CFers excrete 3-4 times more salt than normal. Throw in 30º C+ conditions and a big day on the bike, and my skin and kit is caked with salt crystals.

In 2020 I had to cut an Everesting training ride short after 2,500 m as I started severely cramping. I realized I needed to be more scientific if I was going to succeed and took a salt chloride test (used to diagnose cystic fibrosis) while on an indoor trainer in a lab’s parking lot to simulate riding conditions. Working with a dietician we worked out that I needed to consume 15 teaspoons of sodium over my Everesting (16 hours 12 minutes). For comparison, the recommended daily allowance is less than 1 tsp of sodium per day.

If you’d like to donate to Jason’s fundraising efforts, you can do so at his GivenGain page.